Yet again an uninformed redneck with a gun fetish and a myopic worldview takes the opportunity to use a terrorist attack to try and grab their five minutes of fame.

Denton County Sheriff Tracy Murphree took office on January 1, 2017, and has since populated the command staff with his ex-Texas Rangers colleges, who have unsurprisingly extolled his ‘fresh start’ for the department.

His entirely logical, well thought out points begin with the suggestion that we should pay attention to what is happening in Manchester England.

He goes on to say:

“This is what happens when you disarm your citizens,”

Sheriff, I hate to be a buzzkill here, but British citizens have not been disarmed. To be disarmed, you must first be armed, and that has never been the case in Britain.

The entire cultural attitude to firearms is completely different for the British. There has never, been a point in modern British history when many regular citizens either owned or walked about with guns.

Changes to the firearms legislation after Hungerford massacre placed all semi-automatic and pump-action centrefire rifles, military weapons firing explosive ammunition, short shotguns that had magazines, and elevated both pump-action and self-loading rifles to the Prohibited category.

After the Dunblane massacre, in which a teacher and 16 of Dunblane School’s 5- and 6-year-old students were murdered in Scotland, changes were made that also effectively banned handguns.

However, despite the fact that there was approximately one gun death per million people in Britain vs. approximately 31 per million in the U.S., people like Sheriff Murphree insist on perpetuating the myth that citizens owner guns make us safer.

That is without taking into account such questions for Sheriff Murphree as:

Of course, the answer to all of these questions is no because any logical thought process would bring a reasonable person to one conclusion. Extremists of any political or religious view have the potential to be deadly when they do not have the ability to enter into informed debate, and instead turn to violence against others to try and force their idea upon the masses.

By dismissing extremists as nut jobs or demonizing them, we lose sight of the fact that these are people just like you and me in some regards. They shop, they eat dinner, they walk their dogs and chat with friends at work. Extremists are often only different in one way; they believe that violence and murder are an acceptable way to change minds, something that is abhorrent and unimaginable to the vast majority of us.

Having a gun in your bag will not allow you to recognize an extremist. The people of Manchester would still be mourning today if every one of them were armed because the bomber didn’t walk around with a neon sign saying “violent extremist” above his head allowing people to shoot him before he carried out his terror.

When Sheriff Murphree said the following, he demonstrated a complete lack of understanding of the natural of radical extremism from any religion or political belief.

“The left tells us we must submit and accept these radical beliefs and bend over backwards to make sure we don’t hurt anybody’s feelings,”

Perhaps Sheriff Murphree should educate himself on the difference between the tolerance of different beliefs and the support of extremists.

“The left wants to cater to the very group that would kill every group they claim to support. Folks this is an enemy hell bent on killing you. Committed to forcing you to convert or die.”

He should learn that there probably isn’t a non-extremist lefty in the world who would support the murder of innocent men, women, and children. He should also, perhaps, sit back and think about whom, precisely the “enemy hell bent on killing you” is.

Because without a specific target to fight, you are in danger of fighting and alienating an entire group of people who would otherwise not become involved.

“I’m sick of it. You better wake up America. While you are distracted by the media and the crying of the left, Islamic Jihadist are among us and want to kill you.”

If you are such an expert, Sheriff Murphree, let’s see your detailed plan to end extremism around the world, because we need it – and we need it now.

The full post, which has now been deleted is here: 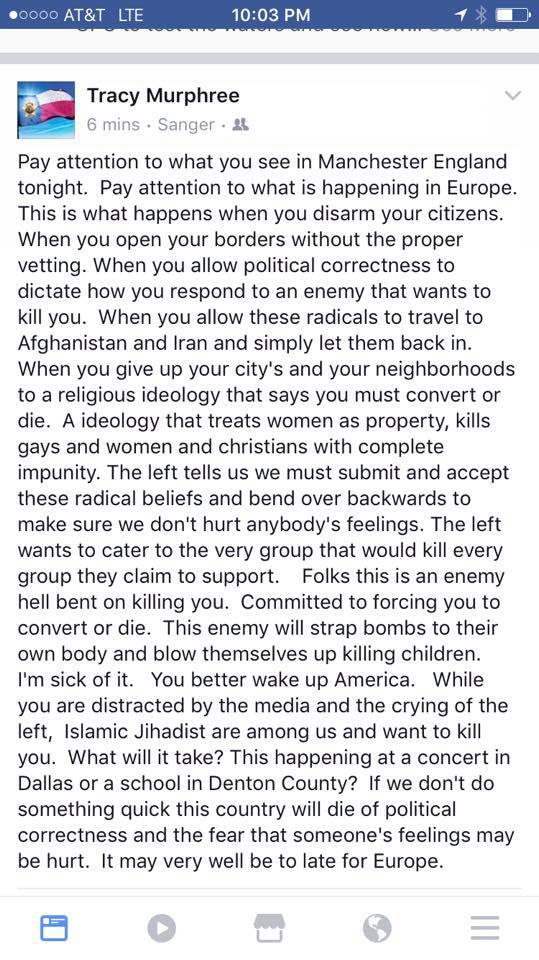 It is not the first time Murphree courted controversy on Facebook in 2016 when he was still just a candidate of the office Murphree posted this to his Facebook page:

Following local reports of his post, the Sheriff claimed to apologize.

What he actually said was “It was a mistake for me to post that,” which is not an apology for his comments. Instead, it’s a disgraceful and cowardly way to say “oops – I meant it but didn’t get away with it.”

Karma is a thing, Murphree… Remember this as we remember the victims.